5 Myths About Mexico That Need to Die

One of the reasons I am writing this blog is to clear up myths and misconceptions about Mexico, so it’s only fitting that one of my posts is along those lines. I have lived in the United States, I’ve met many foreigners from all over the world, and I’ve noticed there are plenty of wrong ideas about my native country floating around. These are the ones that bug me the most.

That could not be more wrong! Mexican cuisine is a unique mix of Native American and European ingredients, flavors, and spices, which make it one of the best cuisines in the world.

Tacos are Mexican snacks, sure, but they are not made in a taco shell. As for burritos and chimichangas, they are about as Mexican as the Statue of Liberty.

Sadly, the only way you can actually savor real, authentic Mexican dishes is by coming to Mexico. You could also read my posts on this blog. That comes pretty close! 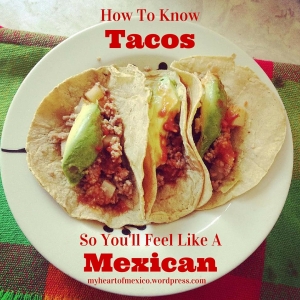 A big saguaro cactus standing in the middle of the desert is a Mexican cliché, but those are only found in the Sonoran desert, way up in the north of the country.

The rest of Mexico is a patchwork of a dozen ecosystems, including pine forests, tropical rainforests, mountain glaciers, and deserts too, of course.

If you are planning to visit, don’t assume the weather will always be hot, dry and sunny. You don’t want to get caught in the freezing rain wearing shorts and sandals! Believe me, that happens to tourists a lot.

Myth #3 – Mexican people are all dark-skinned

Not all Mexicans have dark skin. In fact, Mexicans are the descendants of a mix of Native American, European, African and Asian people, so the population is actually very mixed.

I have dark skinned relatives and blonde, blue-eyed relatives. You really can’t tell if someone is Mexican just by looking at them!

Myth #4 – Mexicans are all poor and starving

Many people assume that Mexico is so dirt poor that millions of people are dying to jump across the border.

There are millions of poor people in Mexico, of course, but there are also millions of Mexicans who own homes and cars, go to universities, travel the world, shop in malls, and have jobs.

I won’t lie, the gap between rich and poor is certainly wide, but the point is that not everyone in Mexico wants to sell fruit on a street corner across the border. In fact, there are now more Mexicans returning to Mexico than leaving for the US. How about that?

The media loves to tell horror stories, and you hear news of drug cartels and violence everywhere you go. However, the boring truth is that you won’t get shot at or killed the minute you set foot in the country. Really, you won’t.

Every day, millions of tourists visit Mexico and return safely to their homes, and millions of Mexicans go about their daily lives without anything bad happening to them. That’s not dangerous, is it?

It’s true there are dangerous places, but they are very specific and it’s almost impossible to fall into one of those on a family vacation. We’re really not living through the zombie apocalypse here. 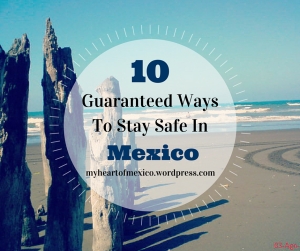 Do you agree or have a different view on Mexico? If so, leave a comment!

fabiolaofmexico I'm a Mexican, mom, wife, blogger, ESL teacher, and translator. My blog is dedicated to sharing all the fascinating things about Mexico that have nothing to do with politics, violence, and drug cartels, I hope you will gain a deeper understanding about my country and learn to love it as much as I do.
Published 12 August, 201519 September, 2017

70 thoughts on “5 Myths About Mexico That Need to Die”