Lent, or Cuaresma, is a special time of year for Mexican Catholics. It’s a time of reflection and penitence, and the most noticeable characteristic is that people generally try to avoid certain things, like eating meat. However, this only means that Mexican cuisine gets creative. There’s need for bland or dull food this time of year! 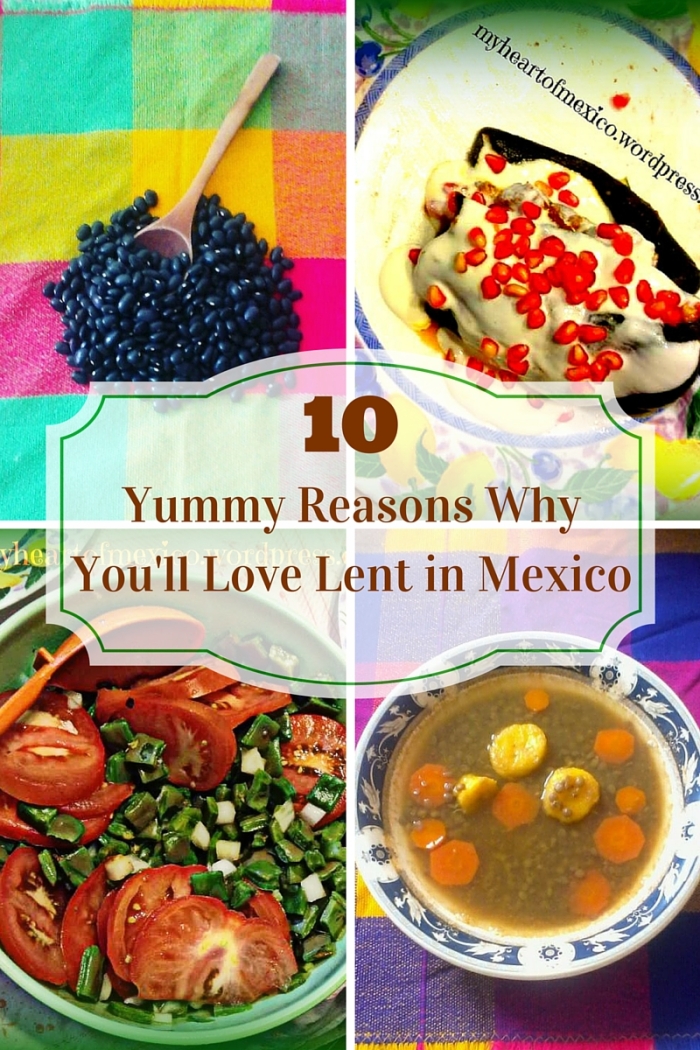 The Meaning Of Lent

Lent holds a very deep and powerful religious meaning that mostly speaks of sacrifice and self-denial. For most people, this means giving up something they crave, which might include such earthly pleasures as alcohol, sweets, and meaty foods.

During Lent, Catholics generally avoid meat, especially on Fridays. In Mexico, generations of cooks have created a surprising array of delicious meatless dishes that make Lent an extra special time of year. I’m not really sure if this lives up to the tradition of sacrifice and self-denial, but it sure lives up to the tradition of one of the world’s top cuisines- Mexican cuisine.

As you can see, poblanos are a must-eat during Lent. If you’re not into stuffed peppers, you can slice them thinly and make “rajas“, or strips. Poblano rajas can be used to spice up rice and casseroles, or they can be served as a side dish. If you want them to be even yummier, you can drown them in sour cream and sprinkle them with corn kernels. Yum!

How To Make Rajas from Mexican Food About

Tortillas can be made fancy and be turned into enchiladas. This a very iconic Mexican dish, and there are as many ways to make enchiladas as there are cooks in Mexico. Enchiladas are so amazing that even if you take out the meat for Lent, they will be delicious!

Leftover tortillas can be used to make chilaquiles. This creamy dish is perfect for breakfast or brunch, and it doesn’t need meat to be amazing either. It’s also the perfect remedy for when you are hungover. Although you really shouldn’t drink during Lent. Not too much anyway.

Red Enchiladas from Mexico In My Kitchen

Beans, lentils, and lima beans make for wonderful soups and side dishes during Lent. They are also a great source of protein to replace meat. I love beans and lentils, and I always make sure to have them in my pantry. They’re healthy, delicious, and nutritious!

Mexican Homemade Beans from My Heart Of Mexico

Mexican Lentil Soup from My Heart Of Mexico

Making croquettes or patties is always fun, and during Lent there’s several yummy options- potato pancakes, tuna cakes, shrimp patties, and cauliflower patties. My kids love the potato and tuna versions, and the shrimp patties can be superb when paired with mole sauce and romeritos. If you don’t know what romeritos are, you should really keep reading.

Potato Patties With Cheese from Mexico In My Kitchen

There are several veggies that are native to Mexico, like romeritos and huauzontles. Romeritos are a wild herb that looks a lot like rosemary but tastes like baby spinach. During Christmas and Lent, these are cooked in mole sauce and served with shrimp patties. They are amazing!

Romeritos With Shrimp Cakes from Saveur

Mexican Romeritos from The Latin Times

Huazontles are a veggie that looks like elongated broccoli and taste like minty spinach with broccoli undertones. The best way to eat them is by mixing them with cheese to make patties and then bathing them in a spicy sauce. This is one of my favorite Lenten dishes!

The nopal cactus is one of my favorite veggies, and it’s also a very fresh and delicious food, perfect for Lent. It may sound too exotic, but nopal cactus can be enjoyed in many ways- cooked, roasted, in a salad, in a stew, in tacos, or even in a smoothie. If you think you would never eat cactus, I must tell you that they are full of fiber, antioxidants, and vitamins. Nopal cactus is a superfood!

How To Cook Cactus Paddles from Mexico In My Kitchen

Tostadas are crispy corn tortillas that can be topped with almost anything- beans, guacamole, fish, veggies, cheese, salsa, you name it! They’re perfect for brunch, lunch, a late night snack, or a party. There really isn’t a set recipe for this. Your imagination is the limit, so start topping!

Fish is the usual substitute for meat. It’s perfectly acceptable to eat it during Lent. There are many Lenten fish and seafood dishes in Mexico, and they are all delicious. The only downside is that the price of fish and seafood skyrockets during Lent, so many people have to settle for canned tuna. Expensive as it may be, most Mexicans always try to have at least one of these heavenly dishes before Easter.

Mexican Ceviche Recipe from Mexico In My Kitchen

During Lent, many people choose to stay away from decadent sweets, such as chocolate. However, Mexicans came up with a mouth-watering simple dessert instead- capirotada, or bread pudding. It’s made with leftover pieces of bread and spiced with cinnamon and cloves. It seems like a humble little dish full of Lenten spirit, but don’t be fooled! Capirotada is so delicious, it might be a sin in disguise.

Capirotada With Bananas, Pecans, And Prunes from Pati’s Mexican Table

I must admit that sometimes, Lent in Mexico seems more like an excuse to have lots of yummy food, and less like a time of self-denial and sacrifice. But in our defense, Pope Francis recently said that Lent should be a time to fast on indifference, not on food.

If that’s true, then we can enjoy all these amazing dishes and share them with all our friends, family, and especially with our foes. Breaking bread together is the best way to put an end to old resentments. That would truly fulfill the spirit of Lent, don´t you think?

Is there a special dish that you enjoy during Lent? Share in the comments!

fabiolaofmexico I'm a Mexican, mom, wife, blogger, ESL teacher, and translator. My blog is dedicated to sharing all the fascinating things about Mexico that have nothing to do with politics, violence, and drug cartels, I hope you will gain a deeper understanding about my country and learn to love it as much as I do.
Published 15 February, 20163 March, 2017