How to Fight Back When Your Content is Stolen

Has someone ever copied your work and passed it off as their own? It’s called plagiarism, and it’s a blogger’s (and a writer’s) worst nightmare. Well, it happened to me, and this is what I did to fight back. 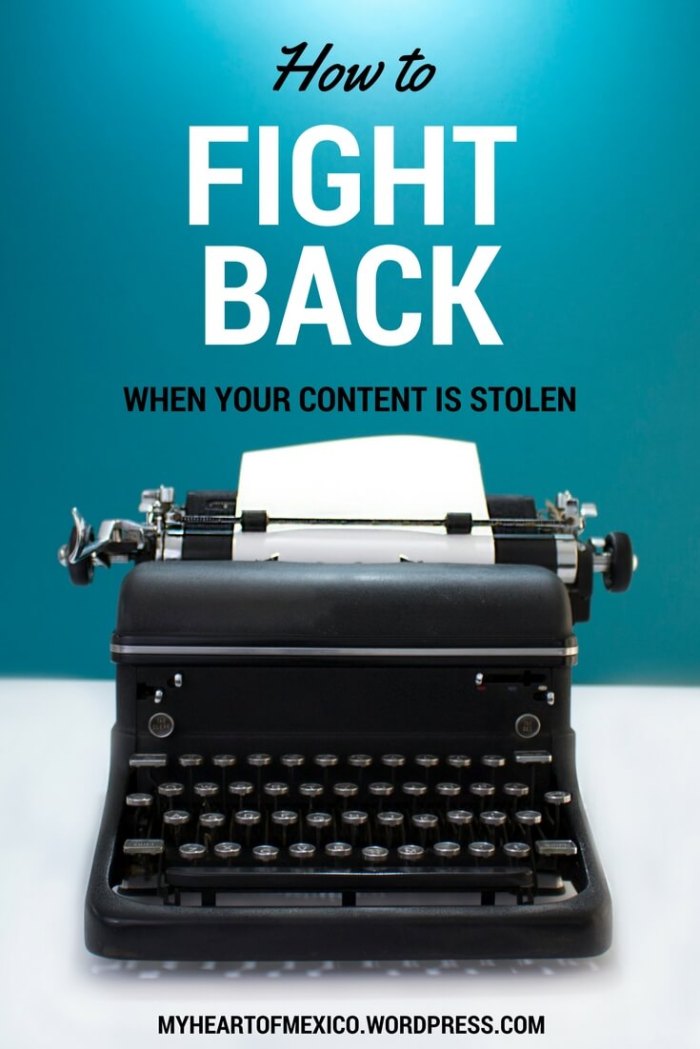 The Problem with Plagiarism

Plagiarism is defined as the practice of taking someone else’s work or ideas and passing them off as one’s own. In other words, it’s copying an entire blog post or parts of it, and then putting your stamp on it. It’s stealing, and it’s wrong.

Unfortunately, plagiarism is a common problem for bloggers and writers, and it can happen to anyone. The good news is you can do many things to keep a plagiarist from getting away with it. Here’s what I did.

How I Found Out My Content Had Been Plagiarized

I love writing. Writing is my life, so when I noticed that someone had copied my work literally word for word, I didn’t just sit there and let it happen.

I have several blogs, but this one is closest to my heart. I’m proud of the posts I’ve published here, and I have a small but loyal following. I know I don’t post very often, but I still love this blog and I’m not about to close it anytime soon.

One night, I was checking the stats on this blog when I noticed something unusual. That day, I had gotten quite a bit of traffic from a site called CDK Global.

This looked odd to me because most of my traffic comes from search engines, email subscribers, and various social media sites. This site obviously stood out so I clicked on the link to check it out.

It turned out the traffic was coming from the newsletter of the CDK Global company website. According to the site, this company “provides integrated computing solutions to nearly 26500 auto, truck, motorcycle, marine, and recreational vehicle dealers.” What did that have to do with my blog? Of course, I was even more curious to find out.

As looked further, I realized the visits to my blog were coming from one of the newsletter articles titled “Spotlight on Mexico”. This seemed logical since apparently, the company has an office in the country.

I looked through the article, and I noticed the author repeatedly linked back to several of my blog posts. This was where the traffic was coming from. Nothing wrong there.

But when I looked at the second half of the article, I realized the author had copied entire paragraphs directly off another one of my blog posts, 5 Wonderful Things You’ll Love About Mexico in the Fall. I was stunned! Of course, he hadn’t linked back to that particular post. He was passing off my content as his own. Aargh!

The author, or should I say plagiarist, was even getting positive comments along the lines of “brilliant” and “you are like sunshine”. The horror!

I had stumbled across a blogger’s (and a writer’s) worst nightmare- plagiarism.

How I Got My Content Back After It Had Been Stolen

For a moment, I just sat there in shock. I felt cheated and wondered if there was anything I could do.

I thought about posting on one of the many blogging Facebook groups I’m a member of and asking if anybody had any idea what I could do about this. I also thought about going on a rant. But no! I decided I had to solve this problem instead of simply whining about it.

I’m subscribed to Darren Rowse’s Pro Blogger newsletter, and I remembered I had seen a post about what to do when someone steals your blog’s content. So I rushed over to the site and did a quick search.

Sure enough, there was an article with step-by-step instructions. Step one suggested contacting the site webmaster via email. The next steps went on from there, eventually ending with step seven, which was titled, “Take legal action”.

I decided to do as step one suggested and hope I wouldn’t have to go as far as step seven.

Luckily, I found a contact email at the bottom of the newsletter site. I wrote explaining the problem and asked them to either take down the content or acknowledge my authorship. I also attached screenshots of my blog post to prove most of the content on the newsletter article had been copied word for word.

I didn’t get a reply immediately, of course. After a short while, I turned off my computer and went to bed. At least I had tried.

The next morning, I woke up and went about my morning chores. A couple of hours later, I opened my inbox and found a reply to my email.

The site admins politely apologized and explained the content was submitted to them as original. They didn’t take down the article but agreed to give me credit for my work.

I went back to check the newsletter article and sure enough, my name and blog were clearly credited at the bottom. Victory!

In the end, it’s fine they didn’t take down the article. I did get a couple of backlinks and I’m still getting occasional traffic from there. So it’s all good.

The best thing is I was able to fix the problem and get credit for my work. Fortunately, it all ended well.

Despite the happy outcome, this little episode got me thinking the only reason this whole problem came to my attention is the plagiarist linked back to my blog. Yes, I know. It’s weird, but stranger things have happened.

The ProBlogger article on plagiarism suggested the use of tools like CopyScape to check if anyone is stealing parts of your work. I tried and found no relevant matches, only things like reblogs, which are fine. However, you can never be too careful.

If you’re a blogger or a writer, or if you create any sort of content, always be on the lookout for plagiarists. You never know when someone decides it’s a good idea to steal your content. And it won’t always be so easy to get it back.

Has someone ever plagiarized your blog content? What did you do about it?

This post was originally published on my Medium publication, The Word Tree.

fabiolaofmexico I'm a Mexican, mom, wife, blogger, ESL teacher, and translator. My blog is dedicated to sharing all the fascinating things about Mexico that have nothing to do with politics, violence, and drug cartels, I hope you will gain a deeper understanding about my country and learn to love it as much as I do.
Published 17 January, 2017