Why You Need To Start Eating Healthy Mexican Chayotes

You may never have heard of a little veggie called “chayote“, but you should start eating it now. Here’s why!

A “chayote” is a widely-available vegetable in Mexico, although it might be harder to find in other countries. You can buy it on Amazon and in specialty grocers that carry Central American products. It’s also a food you should really fall in love with.

Many people think Mexican food is always unhealthy, but they couldn’t be more wrong. Mexican dishes often include vegetables, and the chayote is one of them.

What is a chayote?

A chayote is a little green vegetable native to Mexico. It looks somewhat like an overgrown pear, but it’s not exactly sweet. Chayotes have a mild taste similar to zuchinni. In fact, chayotes and zucchini belong to the same family.

The name chayote comes from the ancient aztec word “chayohtli”. The Spanish conquistadores took this little veggie back to Europe and also helped it spread to Central and South America.

It is believed that chayotes were one of the first domesticated plants in ancient Mexico, and they’re also one of the most common ingredients in Mexican food. It’s not hard to see why! 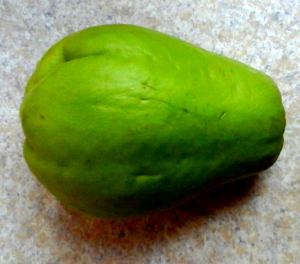 Why You Should Eat Chayotes

Chayotes are very nutritious, full of antioxidants and vitamins. They’re also versatile. You can find them in salads, soups, and stews, and you can have them boiled, baked, mashed, fried or pickled.

The best part about eating chayotes is they’re low in carbs and low in calories. If you want to lose weight, or if you have diabetes, chayotes are your best friends.

You may think chayotes don’t look very appealing, but don’t be fooled. They’re so soft and mild, they go with everything. In fact, if you add the right seasoning, they can substitute for other foods. Sort of like cauliflower.

Personally, I love to substitute mashed potatoes with chayotes. This saves me plenty of carbs and calories, and it’s also a quick and easy recipe. Are you sold on the idea yet? Let’s get cooking! 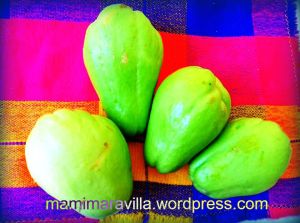 How to Pick and Store Chayotes

Chayotes are in season from May to September, but you can find them all year round in any Mexican market or supermarket.

When you pick chayotes, they should be firm to the touch and the skin should be uniform in color, without spots or blemishes.

Chayotes must be stored in a dry place, away from direct sunlight. They keep well outside the fridge, but you should use chayotes before they get brown spots because this means they’re past their prime.

In any case, I don’t like to waste anything, so I don’t throw away spotted chayotes. I simply scoop out the spots, and cook them.

First, you have to wash and peel the chayotes. You can peel them with a regular peeler, but be careful. Chayotes give off a slippery resin that can end up on all over the palms of your hands. 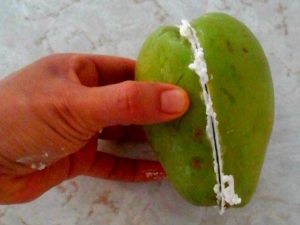 You can scrub off this resin after peeling, but there are ways to keep it off your hands. You can cut the chayotes in half and rub both halves together until all the foamy stuff comes out. This should get rid of most of the chayote resin. 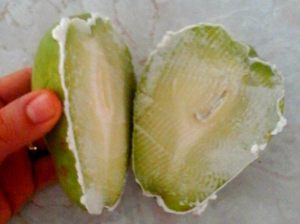 After they’re washed and peeled, cut the chayotes into large chunks and remove the large seeds in the middle. Cook them in water with a bit of salt and sugar until they’re soft, or you can also steam them. 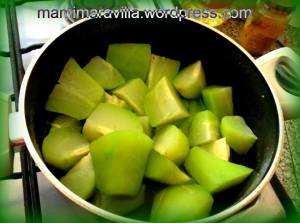 Once the chayotes are soft, remove them from the fire, drain them and start mashing them. It might be tempting to use a blender or a food processor for this, but don’t do it. Chayotes are so high in water content you’ll end up with chayote soup in the blender.

Next, heat the olive oil on a pan and then add the onion and garlic. When the onion is transparent, add the mashed chayote mixture to the pan.

Season to taste. You can add a salt, pepper, and chicken bouillon. You could also add scallions and even grated cheese if you want a thicker consistency. Chayotes are like a blank canvas for your culinary creativity!

Let the mashed chayotes simmer for a few minutes so the liquid will evaporate a little, and they’re done!

Chayotes are a Healthy Superfood

Chayotes are a low carb, healthy vegetable that’s full of vitamins, antioxidants, and fiber. It’s such a light food, that you can have it even with an upset stomach. If you want to a healthier diet, eating chayotes is the way to go.

Replacing mashed potatoes with chayotes is just one idea, but you can also throw this little green vegetable into soups and salads. It’s also great with spicy stews. It can be a side dish or part of the main dish. The chayote is one of the most versatile veggies on this planet.

Let’s have some chayotes today!

Would you add chayotes to your daily menu? Are there any other healthy food substitutions you like? Share in the comments!

fabiolaofmexico I'm a Mexican, mom, wife, blogger, ESL teacher, and translator. My blog is dedicated to sharing all the fascinating things about Mexico that have nothing to do with politics, violence, and drug cartels, I hope you will gain a deeper understanding about my country and learn to love it as much as I do.
Published 17 July, 2017